It recently occured to me that A.A. Milne had an understanding of dementia when he created Winnie-The Pooh.  Throughout the exciting stories of The hundred Acre Woods this “chubby little cubby all stuffed with fluffy” often mentions his forgetfullness, cognitive impairments and not being able to say what he wants to get across. 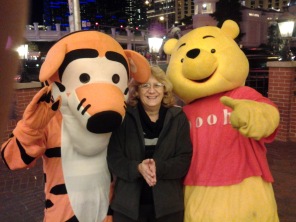 Although some phrases used in 1929 to describe dementia (such as “a bear of very little brain”) may seem unacceptable today, the stories often describe what dementia is like.  And who can resist the words, wisdom and laughter of The Silly Old Bear?  No matter what goes wrong – he ends up smiling!

The Pooh gang was full of new adventures. Some brought challenges, fear and loneliness, but through it all they found a way to turn their journey into laughter. Although Winnie-The-Pooh and gang have been a passion of mine for a long time, I have recently found that I can really relate to many of quotes from Winnie-The-Pooh.

There are days when I just can’t say what I am trying to say – the words just get stuck in my head.  As the Pooh Bear said:

“When you are a bear of Very Little Brain, and you Think of Things, you find sometimes that a Thing which seemed very Thinkish inside you is quite different when it gets out into the open and has other people looking at it.

At times, conversation tires me out because of the amount of energy it takes to comprehend the words.  Here’s how Pooh explains it:

“For I am a bear of very little brain, and long words bother me.”

“It is more fun to talk with someone who doesn’t use long, difficult words, but rather short, easy words (like What’s for lunch).

Like me, the Silly Old Bear was also challenged with memory loss, counting, getting lost and forgetting how to spell (thankfully we live in an age of GPS and spellcheck).  He put it this way:
“Did you ever stop to think, and forget to start again?”

“I did know once, only I’ve sort of forgotten.”

“My spelling is Wobbly. It’s good spelling but it Wobbles, and the letters get in the wrong places.”

“I’m not lost for I know where I am.  But however, 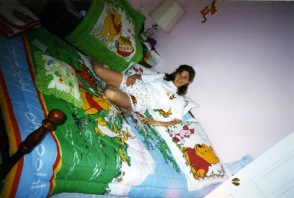 where I am may be lost.”

“Something feels funny.  I must be thinking too hard.”

In the Hundred Acre Woods, Winnie-The-Pooh has a “Thoughtful Spot.” He often goes there, sits down on a log, taps his head, closes one eye and says “Think, Think, Think.”  That is a sign that he is thinking hard. Roy and I also have a thoughtful spot – it’s called a hot tub.

In our thoughtful spot we cry, laugh and “Think, Think, Think.”  Roy and I work constantly to identify obstacles that are causing a challenge and figure out what adjustments we can make to overcome the obstacle.  In Pooh’s words: “Think it over, think it under.”

Poor Winnie-The-Pooh seems to have experienced cabin fever which has clearly led to hallucinations.  Staying at home with little social interaction at times makes me feel like this, only I talk to the dogs rather than a mirror.

Winnie-the Pooh to his reflection: “Oh, Hello.  Am I glad to see you.  It’s more friendly with two.”

The Pooh stories also do a good job summing up how lucky I am to have my best friend as my husband.

“It’s so much more friendly with two.”

“As soon as I saw you, I knew a grand adventure was about to happen.”

And how special my family is:

“A day spent with you is my favorite day.”

“Some people care too much.  I think it’s called love.”

“I think we dream so we don’t have to be apart so long. If we’re in each other’s dreams, we can never be apart.”

“How do you spell Love Piglet?” “You don’t spell it, you feel it.” – Pooh.
As I travel down this dementia journey, I have found love, laughter and inspiration from a Silly Old Bear named Winnie-The-Pooh.  Hopefully I will also be able to bring joy into the lives of others. 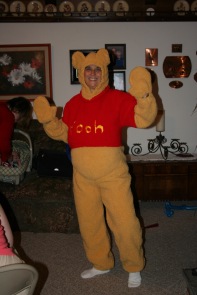 So to all my friends and family wherever you are, I’ll end with some wisdom from Christopher Robin:

“If ever there is a tomorrow when we’re not together . . . there is something you must always remember. You’re braver than you
believe and stronger and smarter than you think. But the most important thing is, even if we’re apart . . . I’ll always be with you.”

Just a note:  Winnie-The-Pooh also said: “Nobody can be uncheered with a balloon.”  I haven’t tried it yet, but I bet it works! 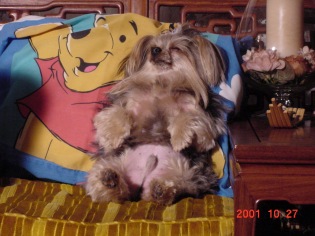 2 thoughts on “Did Winnie-The-Pooh have Dementia?”